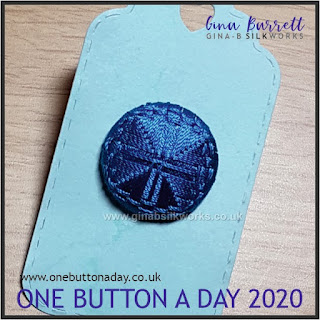 Today's button is inspired by a copper-alloy post medieval button found in London and now in the Museum of London. It is dated to "post-medieval" which for finds, can mean anything from 1500-1900, but in reality usually means the 18th century. And, looking at the design of this button, 18th century is pretty good.
I believe that many "mock passementerie" (as I refer to them in my head), have a basis in truth. After all, we have mock leather knot buttons, and can trace them directly to the hand-tied leather knot buttons. Metal buttons survive far better in the ground, so by looking at these I think it isn't too far to assume that they were based on an original thread button. Especially when one has been worked as clearly as this original.
Of course, the question is - would the original have been monochrome as I have worked it, or in two colours as yesterday's button?
I've used Au ver a Soie Soie Gobelins and the covid-delayed-Indian mould again!
Size : 21mm / 7⁄8" / 34L