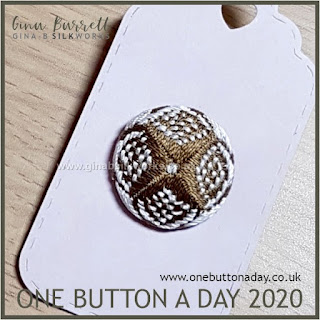 Day 211 : Hurst Cross
Today's button is based on an historical button. The original buttons are on a banyan dated to the 1730s - but it was remade in the late 19th century. Having seen really close up images of the buttons, it really does appear as though the buttons are original to the garment but the buttons are, I suspect, part of the remake. Something about them really speaks Victorian.

Saying that - everything about the technique is ok for the 18th century, including the weaving. So, it is difficult. If a garment has been reworked, how easy is it to tell what has been added when the items are still handmade, use the correct materials, and use techniques known? Could the items be a special early example, or dismissed as an addition? Difficult.
The name is for my friend Neal Hurst at Colonial Williamsburg, who first alerted me to the buttons. He's very good like that and has shared details of other buttons with me.
I've used Au ver a Soie Soie Gobelins for the foundation, and Soie Perlee for the weave. The mould is one of the ones we are still waiting on from India....
Size : 21mm / 7⁄8" / 34L