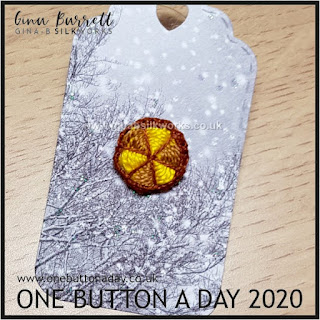 Well, I had been working on a domed button using woven sections for another projects (check out my other blog later today for a bit of info) and wondered how it might work on a flat mould. I chose some colours, and as I worked, figured there was no real way at avoiding what it looked like at this small size - even though it should be black and yellow. It's a bit too small to add too much doodle work when my thumb shouldn't be used.

The joy of being someone who grew up in the cold war, I know these symbols. I did a quick look online, and it turns out the originally it was magenta and blue. Those values are quite close together (in fact a black and white copier wouldn't probably distinguish these very well - as I was a graphic designer, you learn these things), I'm not not surprised it didn't last long in that form. If you'd like to read a bit more about the origination of the symbol, I found details here.

I used a little thin mould - size 12mm, that were left over from some Mark cut for me for a commission, and No 12 perle.