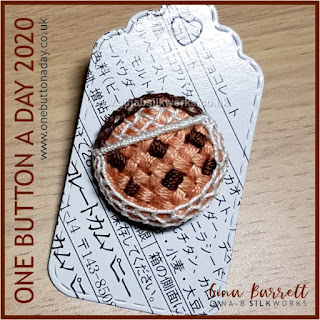 Today's post is rather late in the day - yesterday I lifted a box, hurt my thumb, and by last night is was quite swollen and hurt too much to use. I managed to finish the button by mounting the button onto a tapered stick so that I could hold it with my left hand while not using my left thumb.

Doctor's this morning, and rest and a new exercise regime (every 2 hours) today. Turns out I have DeQuervain's tenosynovitis - which explains why my thumb has hurt on and off for months (I thought it was arthritis kicking in).

It's taken longer to do the ordinary things one-handed today, hence the late post!

The button is a basketweave worked over a No 16 tagua nut mould, and this base is one that I had already - I could not have worked that neatly last night. Instead I added the embellishments, wrapping and grappé to change the base entirely.  I think looks rather like those really fancy iced biscuits you see. I've always wondered if they actually taste as nice as they look?