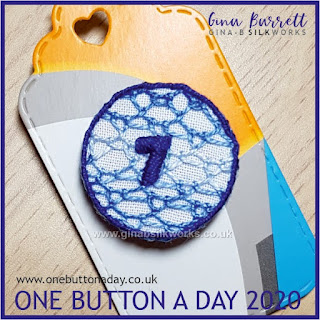 So I had an idea the other day - what about a series of sampler buttons? As I can only really work one-handed at the moment, I'm thinking both embroidery samplers (which is pretty much what yesterday's button was) and needle laces.

In the Encyclopedia of Needlework by Th. de Dillmont (a book everyone should have if they can!), she sets out the lace stitches by number. She gives any common name that she knows of at the same time too. I thought a whole set might be interesting. I actually worked two - the second in a solid blue and with closer stitching, but this looked more decorative and button-like to me. I've used the variegated No 12 perle, with solid No 12 perle for the edge and number, and a No 3 mould.

Honestly, I have no idea why I started with the 7th. I did start this on the 5th, so there was no forward thinking that I would post it on the 7th of the month until I realised it last night. But a pretty cool coincidence, especially as she hasn't listed a common name (which I would have used as the title).

I will carry this on - it would make a nice hanging I think. So, the odd one might come up over the year :)