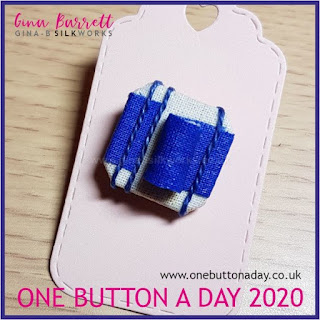 What can I say? This button just makes me think of the 80s, hence the name.  I've been humming Duran Duran all day too...

Technique-wise, something a little different. The button mould is a No 65 trimmed square, and I've covered it with cotton fabric. This is not how it was intended to look - I was struggling with what I wanted and so instead got out my pot of Paverpol and decided to use that to both attach the pieces and thread in the shapes I wanted (the centre is rolled), and to harden the whole thing. The Paverpol is white when applied, so it was quite nice to wake up this morning and see the finished result!

Shame the weather didn't agree. I have had such a hard time photographing this that I decided to wait until I was at work and could get out the photo lights (I have been sorting out my button post first thing in the morning). Which, I have to say, have not yet been properly set up. And lo and behold, a bit of fluff appeared, so I had to start again. And you know, my photo software struggled too, so my note to self is do not use this blue again :)

The finish is really nice though. The Paverpol is a hardener, so the rolled feature won't get squashed. I see more buttons using fabric hardener in my future!