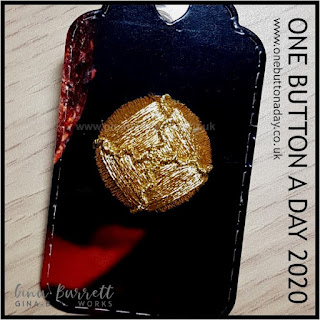 
Today's button is based on a staybright (anodised aluminium) military button. In an old journal of the British Button Society - Issue 71 from June 1992 to be precise - there is a little piece about a military button given as an explanation to the term death's head asked in issue 69.

"The design, on metal buttons, was used by certain staff officers of the British Army from about 1780 until 1900. It was also known as 'German' and 'Sprig Aire'."

The article goes on to state that in April of 1991, this button design was chosen to be used by the new Adjutant General's Corps, calling the button design the death's head.

Alongside this, is a line drawing of the button provided by Firmin & Sons, makers of the said buttons.


It is obvious from the drawing, that the design was taken originally from a thread wrapped button, although the leafy springs along the edge are, I think, a metal button design feature. They are quite similar to the surrounds of Victorian "perfume" buttons.

Today, a slightly different design tends to be called a death's head (especially when referring to those of the 18th century) - no doubt as a result of deeper research by various button collectors over the years. That, and the fact that in some areas (the clergy and QCs for instance) the 'original' thread deaths head seems to have been in regular use, if a tailor could be found to supply them. When simplifying to create the design in metal, unless you know how to make the buttons, many people still refer to this as the death's head, which makes complete sense.

I enjoy reverse engineering non textile buttons that were obviously based on textile types. It is always interesting to see how the button designers interpret the techniques that they are not familiar with.

I've used fake gold thread - DMC Diamant thread. It was actually much harder to work with than real gold thread, especially for the wrapping. They look less smooth that they would have looked with real gold, so I will need to revisit this now I have a way of working it. The mould is a tagua nut mould, No 15.